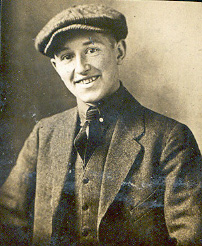 Lloyd grew up in Walnut Creek, Ohio.  He met Martha Fouch on a blind date while attending Wooster College in Wooster, Ohio.  A month after her 19th birthday, they went to Nappanee Indiana where they married on November 22, 1916.[1]  To support his family, Lloyd left college after his sophomore year and returned to Walnut Creek, where he worked for his father in his general store.[2]  Several years later the family moved to Cleveland Heights, where Lloyd got a job as a teller at the Superior Savings and Trust Co.  By 1926 he was the Assistant Credit Manager with the Osborne Manufacturing Company.[3]  Sometime after 1940, the family moved to New Philadelphia, Ohio for a time and then back to Walnut Creek in the 1950’s where they had a store in Berlin, Ohio.[4]  Their last residence was in Amherst, Ohio at 262 Lincoln St. where Lloyd worked in accounting for the U.S. Automatic Company.[5]

His daughter, Vivian, later recalled that during the depression the family was very poor.  Lloyd couldn’t always pay the rent and Lloyd and Martha often just had bread and butter for dinner so the girls could eat.  Lloyd was an honest and conscientious man and after the depression, paid back all of his outstanding debts, even though many of his creditors said he did not have to.  When Lloyd had the chance to buy their first home from his cousin, he debated for quite a while.  He finally decided to buy it, but when he sold it years later, he gave his cousin half of the profit he made.[6]

In his leisure time, Lloyd was an avid golfer and bowler.  He also enjoyed filming home movies.  The family spent many summers at Turkey Foot Lake where they rented a cottage with his brother Clyde. When he reached 60 he told his wife several times, he didn’t think he would ever make it to age 65.  He died November 11, 1957 of a stroke at age 61.[7]